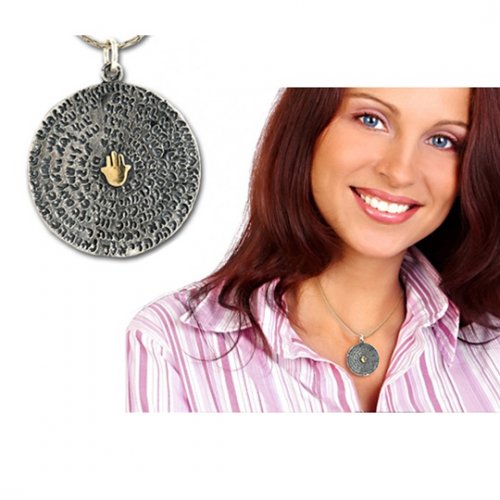 This unique Kabbalah jewelry in Sterling Silver and 14 K Gold, is entirely hand engraved by the craftspeople at Golan Studio, Jewish Jewelry.

Although we used a female model, this is a unisex design .

What are the 72 names? Ancient Kabbalist, Rabbi Shimon bar Yokhai writes in the Zohar that it was Moses, not God, who parted the Red Sea allowing the Jews to narrowly escape Pharaoh and the Egyptian army. Moses had a special formula. The formula that he used to overcome the laws of nature was hidden in the Zohar for 2,000 years.

This formula is called the 72 Names of God. The 72 Names are not really names, as in Betty, Bill, Barbara, and Bob. The 72 Names are 72 three-letter sequences composed of Hebrew letters that have the extraordinary power to overcome the laws of both mother and human nature.

These 72 sequences are actually encoded into the Bible story that tells of the parting of the Red Sea. They are like conduits that transmit various blends of energy from the Light into our physical world. By using the power of the 72 Names and overcoming their reactive natures, Moses and the Jews were able to accomplish the miracle of the Red Sea.

×
×
×
×
Exclusive Offers and Sales by Signing up
Sign In